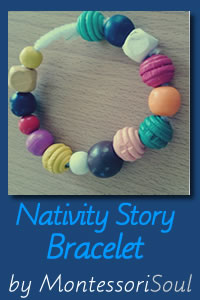 I have heard of other Nurseries making Nativity Story bracelets so had a look around online. I found on on My Montessori Journey, thank you. It inspired me to rewrite the Nativity stroy in a simple story to encourage children to read it themselves. I have also included suggested bead colours but you may want to change them.

One day the angel Gabriel (white bead) came to Mary and told her that she would have a baby. He would be called Jesus and would be the son of God.

Mary was so amazed by what happened. She told her husband-to-be Joseph what the angel had said and after a time she found that she was going to have a baby.

When Mary was nearly ready to have her baby King Herod (red bead) said that everyone must go back to where they were born to pay their tax.

So Mary and Joseph had to travel to Bethlehem on a donkey (orange bead). It was a very long journey and they arrived in Bethlehem at night.

Bethlehem was very busy as many people had come back to pay their tax. Mary and Joseph tried lots of inns to find a bed but they were all full. Finally they found an inn where the innkeeper was very kind and said they could stay in a stable (dark green bead).

Mary knew the special baby would be born soon. That night baby Jesus (pink bead) was born. To keep him warm they wrapped him in a cloth and laid him in a manger, with the animals lying peacefully around him.

The shepherds (brown beads) were up on the hills when they were suddenly blinded by a bright light.

It was an angel (small white bead).

She told them a special baby had been born and to follow the bright star (yellow bead) in the sky.

At the same time 3 wise men (purple bead, small red bead, dark purple bead) also saw the star.  They knew a special baby had been born so they also followed the star.

When they found the stable the shepherds gave Jesus a lamb (beige beads).

As they all gathered around the baby Jesus, the stars twinkled and the angels sang as the animals watched peacefully they all knew this was a very special day.