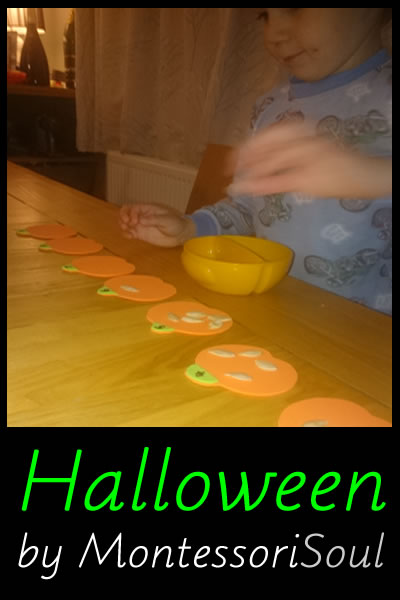 Here are some more ideas for Halloween – we’ve had great fun doing them I hope you enjoy them too!

As we are having friends over on Friday Freya wanted to decorate the house – I saw a great post on Pinterest about window gels from TeachingMama.

You basically mix 2 tablespoons of PVA with a few drops of washing up liquid and some food colouring.

For our spider web we actually added glitter rather than food colouring. We put the mix in a squeezy bottle. Freya then made the pattern on some Reynolds Freezer Paper

(I love this stuff it has so many uses – makes cutting out appliques and felt sooooooooooo much easier.)

We then mixed up some black to make some spiders and bats.

We tried two techniques. First, as TeachingMama did, we used a cookie cutter to make the shape of the bat. Our mixture went a bit gloopy I think that the PVA is a bit old….

We then used a icing bag to make a spider – this seemed to work much better than using a paint brush. As I type they are still drying – I think it takes about 24 hours… I will keep you posted!

Seb is doing really well with his numbers at the moment so I wanted to make an activity to encourage him. It is based on the cards and counters material in the Montessori classroom.

I made some pumpkins out of orange foam. Firstly I used a cookie cutter to draw the pumpkin on the orange foam and cut it out. I then glued a green rectangle on where the stalk goes and when the glue had dried I trimmed it off.

Seb then put the correct number of seeds on each pumpkin.

He did brilliantly to 5 – so we will keep practicing!

Cleaning out the shed today we found some huge spiders! I am not sure where I got the insect viewer from but we had these ones at school which work really well – 2-Way Bug Viewer

Seb was facinated by the spider he was asking about its pointy bits at the front.

I have made some Parts of a spider cards from tomorrow and some photo fact cards! I hope he enjoys them!

Parts of a Spider cards

I’ve added some more ideas on my Pinterest – check out my new Halloween board.