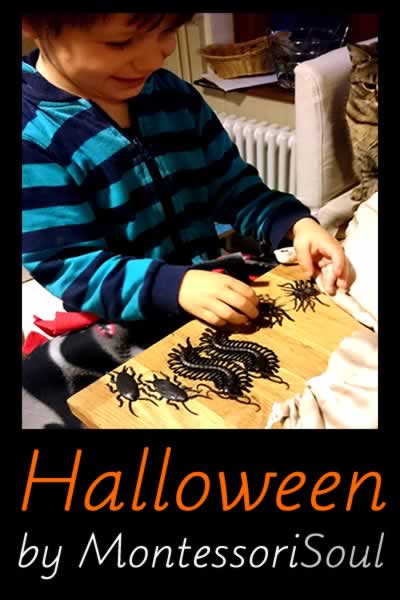 I found some plastic insects in Sainsburys and Waitrose (supermarkets in the uk). They are a decent size about 2-4 inches / 5 – 10 cm so they are perfect for little hands to feel. I decided to do this as a matching activity using feely bags so Seb just had to feel the bugs working on his sense of touch.

The idea is that each bag has one of each minibeast in it. Seb has to then put one had in each bag and feel around. The challenge is for him to bring out a matching pair.

Cheeky monkey is trying to have a sneaky peek!! I explained that he was only supposed to use his hands to feel the bugs! I love how our cat Tinkerbell is watching so intently!

Once he brings out a matching pair he lays them together in front of the bags.

Seb absolutely loved this – his face says it all!! He repeated it 4 times before wanting to do something else! And the best part is he put it all away himself without asking 🙂

I love to sew and often do projects with Freya but Seb has never shown an interest. This morning I made the bags for the Minibeast feely bags. Seb sat on the sofa doing some pirate phonics on the sofa. When we had finished using the activity above Seb asked to make something with me!! I had to act quickly so came up with this idea to make a Spider and Seb helped with every step! Made my day and it was only 7am!!

Seb told me spiders were black so we found some black felt – I cut out 2 circles using a sellotape roll as a template!

Normally making soft toys I would design them so that they are sewn inside out and then turned right way but I wanted to keep this quick so I am simply going to sew and that will be it. We laid out some black ribbon to make the legs. Seb wanted to add ‘pointy bits’ at the front (for the mouth parts he has obviously been studying spiders!) so I used a piece of black pile cleaner.

Now to sew it together – Seb wanted to use green cotton – I think the contrast will look great! He’s concentration hard on this sewing! I like to get the children involved as much as possible so Seb could press the buttons on the sewing machine to choose stiches etc. We put the other circle on top of the felt with ribbon and pipe cleaner, pinned it in place and then sewed around the edge about 1/4 inch / 5mm in.

Before completing the full circle (about 2 inch / 5cm) before the end stuff some toy stuffing into the spiders body.

Once the body is stuffed then just sew the rest up! Seb loved helping – yay!

Finally we added some green beads for the eyes! Voila! Seb loves him and he has been everywhere with us all day – what a success – so simple and Seb could help every step of the way!

Did you see this on my Instagram? I did it on a nursery class last year and it was a hit. So simple and great for hand eye co-ordination. Get a pumpkin, golf tees and a small hammer. Then let them loose! Great open ended activity – some children made some beautiful patterns, some just enjoyed hammering!

I have been making some montessori cards to use as part of these Halloween activities. I have so many I want to make and not enough time!! So far I have made these – I will make more before Friday and add them – I especially want to do parts of a spider for Seb, parts of a bat and some pumpkin ones for parts of a pumpkin and the life cycle of a pumpkin so keep checking back on this blog, facebook, pinterest and instagram!

Minibeast and small Halloween animal cards– use these cards to learn names of different animals associated with Halloween,

Skeleton cards – Leach children about the human skeleton and the names of all of the bones.

Parts of an Owl cards – Learn about the different parts of an owl.

And so much more….

I saw this great idea for foaming spiders on Fun at home with kids.