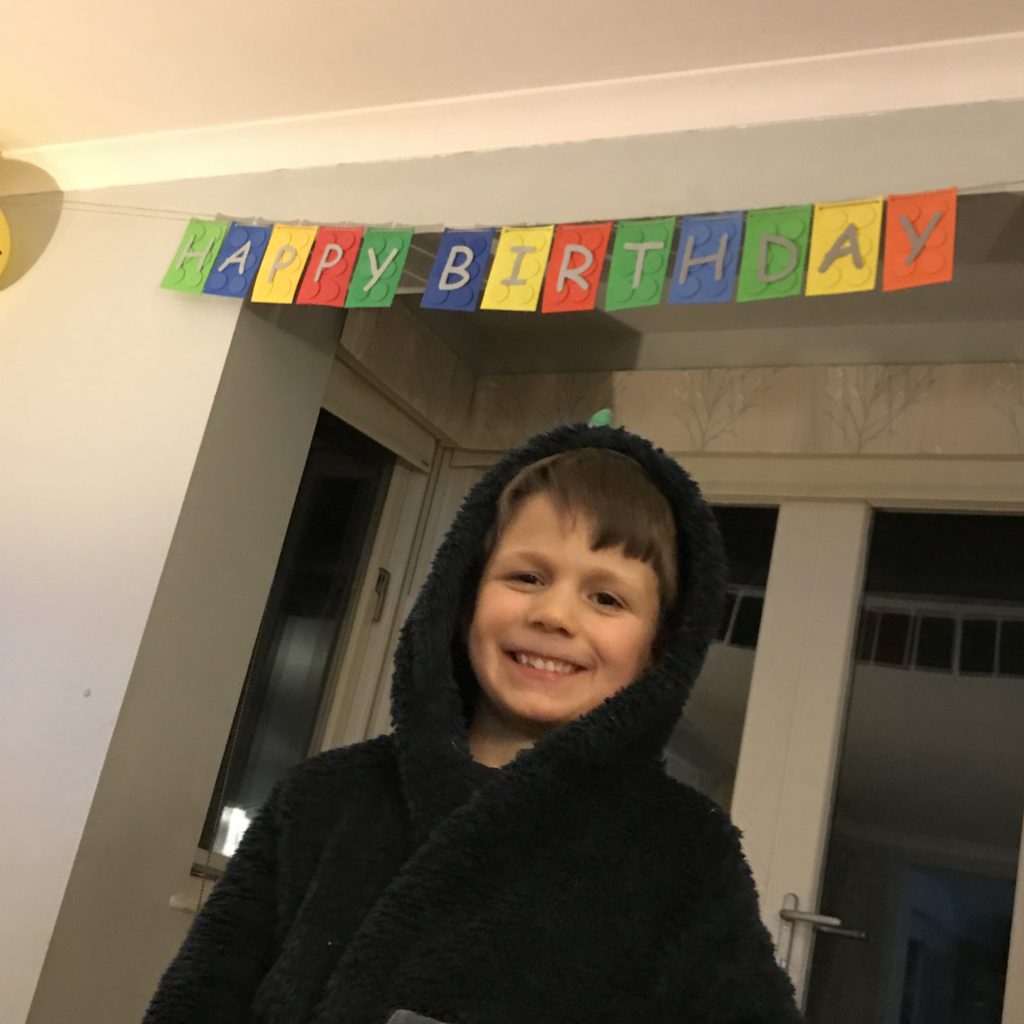 I LOVE Pinterest. If am am planning anything, a party, a lesson, a sewing project, I will always make a board and search for ideas and inspiration. If you are interested my Pinterest board is pinterest.com/montessorisoul.

But back to Seb’s birthday. The boy is obsessed with Lego so it was an easy option to do a Lego Party.
I have found spending time finding simple but effective ideas can have a great impact. So I researched food, decoration and games.  All pinned on to my Lego Party board. I have also created some things from other parties adapted for the Lego theme.

Disclaimer: this post includes links to Amazon which are part of an affiliate scheme to help the costs of running this blog and giving everything away for Free. Such a simple idea – yellow balloons and sharpies!! We used oil based sharpies for the white. Freya really enjoyed this! This became a bit of a mission – but using a5 craft foam I made rectangles 10cm x 15cm. Cut 6 circles approx 3cm. Glued using my amazing new glue gun I got for Christmas. Finally, added the letters and threaded onto a string. Looks amazing! We sorted out pots of Lego so each child has the same bricks and 2 sets of wheels. The kids then set about making there own cars to race down the ramp!  I made a ramp using an MDF board I had and then used black insulation tape to mark the lanes. As I was on a roll with the craft foam I also made the start and numbers! Could have easily done this with a sharpie though 🙂 I saw this idea so we set about making our Piñata using papier-mâché on and old box. I didn’t want to use sweets so the Piñata was pulled with finger lights and party blowers so the children could have a disco afterwards! Pin the head on the Lego man:

We made an A3 Lego man and laminated it. I then made heads the same size to match. As the kids arrived they each decorated a head with a sharpie. Very simple babybel cheese and black icing for the eyes! So simple, yet so effective. Took about 2 minutes! I ordered some Lego cookie cutters from amazon. Cut the shapes out of a tortilla – then baked in 180c oven for 5 minutes. Voila. Humus in the middle and healthy Lego food! I used a bottle lid to cut the circles and then ‘glued’ in place with some cream cheese. Simple as that… This cake was so much easier than it looks! We used the Logo moulds to make the Lego bricks that you can see at the top. But other wise we just rolled out ready made icing and cut it into rectangles and Freya built the wall. As we made a round doing cake (just a basic recipe with cream cheese icing between the layers) we cut one edge off so it was flat. Once the wall was built we used white ready made icing to drape over the top and then cut and rolled and added the Lego figures! Freya used the Lego cutters to cut out puff pastry and turned them into mini pizzas. All her own work!

It was a great party – made better by great friends.

As always we hope you enjoy this too! If you have any questions or feedback please email me Info@montessorisoul.com

Facebook: www.facebook.com/montessorisoul please like me to keep up to date with my posts as I make new materials all of the time.